Smart city, resilient region : the case for smart resilience and Genoa as an international model 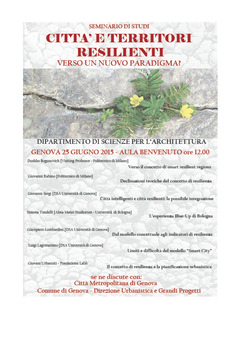 Raffaele La Capria, in his novel, “Ferito a morte” which was awarded the Strega prize in 1961, already talked about Naples, his hometown, describing the transformations it was subject to, because of property speculation. The Italian Aurelio Peccei, promoted as member of the “Club di Roma”, contributed to the drafting of the known report “I limiti dello sviluppo” Limits to growth published in 1972. It is a report drawn up by a group of analysts from MIT Cambridge who modeled the limits to the environmental systems’ of the planet to supporting our social-economic system. Today in Italy, according to various sources, we have 130 million rooms. We have more than five million apartments that are not inhabited. A lot of industrial areas are abandoned, many public facilities such as hospitals or schools are disused, a great number of railway and road infrastructures is not fully used or sits abandoned. The Italian urban and territorial planning system has not been able to harness territorial development effectively in the past decades. Our fragile territory has been subject to serious damage because of climate change – storms, fires, floods, land-slides - as well as earthquakes. At the same time, valuable farming and wildlife land is being lost to further expansion of urban areas. We share the opinion of those who think it is necessary to slow down or reduce to zero soil and landscape consumption in Italy. We must better mitigate factors which fuel global warming, as well as start adapting to whatever climate change-related events will affect us in the future, regardless of our (belated) efforts at mitigation. This choice means determination to build a strong model of sustainable development, already suggested by the European Union, by outlining some environmental *, energy and industrial ** policies. As concerns landscape, territorial and urban systems, we need to go beyond the already established paradigm of sustainable city – the city that is ‘easy on the nature’ – towards the idea, and urgent application, of a city which is able to withstand the ‘nature’s revenge’. Towards that end, two emerging concepts appear useful and effective - smart city and resilient city. The concept of smart city*** was developed around 2000 to refer to the possibility of using ICT tools in order to improve the overall efficiency of urban areas. The concept initially targeted streamlining of urban and territorial systems concerning energy, mobility and housing systems. But now it also promoted – and already implemented – as a way to improve the overall environmental efficiency of the entire urban system. The next stage is likely to be advancing cities, and the individual constituent elements in them, towards greater self-sufficiency too. This is in line with one of the core principles of urban resilience – reducing (or eliminate, when possible) all types of dependency.

120599 Urban and Regional Planning not elsewhere classified, 120504 Land Use and Environmental Planning