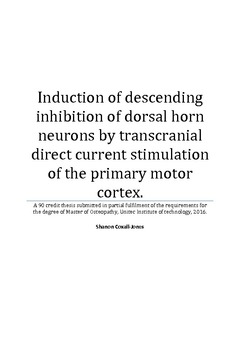 Coxall-Jones, S. (2016). Induction of descending inhibition of dorsal horn neurons by transcranial direct current stimulation of the primary motor cortex. An unpublished 90 credit thesis submitted in partial fulfilment of the requirements for the degree of Master of Osteopathy, Unitec Institute of Technology, New Zealand

BACKGROUND: Transcranial direct current stimulation (tDCS) is an inexpensive, safe, and portable therapy that shows promise in the treatment of chronic pain. While this therapy operates by polarizing neuronal membrane potentials, it is unknown whether a component of its action is descending inhibition of the dorsal horn interneurons. OBJECTIVES: To determine whether tDCS of the primary motor cortex has an effect on the spinal nociceptive flexion reflex of biceps femoris, which would indicate whether descending inhibition of the dorsal horn was resulting from the intervention. METHODS: A cross-over structure was utilized to compare the effects of genuine and sham tDCS against measures of the NFR, as provoked by electrical stimulation of the ipsilateral plantar surface. Two measures of the nociceptive flexion reflex (NFR) were employed; the mean strength of the NFR response via the area under an electromyogram, and the threshold at which the NFR was triggered using temporal summation. Comparisons were made between genuine and sham conditions, and time. RESULTS: No statistically significant relationships between either genuine or sham conditions for either measure were found. A statistically significant relationship with respect to time was observed for both measures that consistent with pain habituation, but not indicative of successful tDCS interventions. CONCLUSIONS: There does not appear to be any relationship between tDCS of the primary motor cortex and inhibition of the dorsal horn, as measured by changes in the NFR of biceps femoris.