Preference of a native beetle for "exoticism", characteristics that contribute to invasive success of Costelytra zealandica (Scarabaeidae: Melolonthinae) 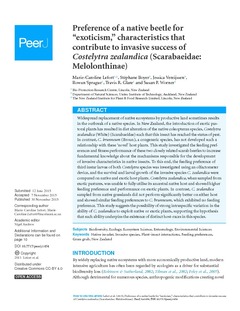 Widespread replacement of native ecosystems by productive land sometimes results in the outbreak of a native species. In New Zealand, the introduction of exotic pastoral plants has resulted in diet alteration of the native coleopteran species, Costelytra zealandica (White) (Scarabaeidae) such that this insect has reached the status of pest. In contrast, C. brunneum (Broun), a congeneric species, has not developed such a relationship with these ‘novel’ host plants. This study investigated the feeding preferences and fitness performance of these two closely related scarab beetles to increase fundamental knowledge about the mechanisms responsible for the development of invasive characteristics in native insects. To this end, the feeding preference of third instar larvae of both Costelytra species was investigated using an olfactometer device, and the survival and larval growth of the invasive species C. zealandica were compared on native and exotic host plants. Costelytra zealandica, when sampled from exotic pastures, was unable to fully utilise its ancestral native host and showed higher feeding preference and performance on exotic plants. In contrast, C. zealandica sampled from native grasslands did not perform significantly better on either host and showed similar feeding preferences to C. brunneum, which exhibited no feeding preference. This study suggests the possibility of strong intraspecific variation in the ability of C. zealandica to exploit native or exotic plants, supporting the hypothesis that such ability underpins the existence of distinct host-races in this species.