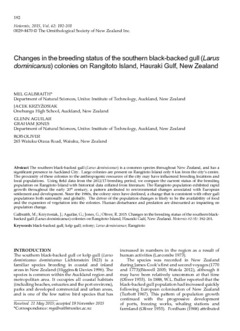 The southern black-backed gull (Larus dominicanus) is a common species throughout New Zealand, and has a significant presence in Auckland City. Large colonies are present on Rangitoto Island only 8 km from the city’s centre. The proximity of these colonies to the anthropogenic resources of the city may have influenced breeding locations and local populations. Using field data from the 2012/13 breeding period, we compare the current status of the breeding population on Rangitoto Island with historical data collated from literature. The Rangitoto population exhibited rapid growth throughout the early 20th century, a pattern attributed to environmental changes associated with European settlement and development. Since the 1980s, the colony sizes have declined, a change that is consistent with other gull populations both nationally and globally. The driver of the population changes is likely to be the availability of food and the expansion of vegetation into the colonies. Human disturbance and predation are discounted as impacting on population change.