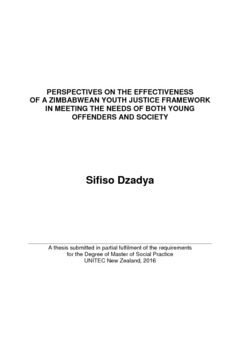 Dzadya, S. (2016). Perspectives on the effectiveness of a Zimbabwean youth justice framework in meeting the needs of both young offenders and society. An unpublished thesis submitted in partial fulfilment of the requirements for the Degree of Master of Social Practice, Unitec Institute of Technology, New Zealand.

There is growing evidence that Zimbabwean current youth justice is failing to meet the needs of the young people and their families. Trying to balance the welfare model and the criminal justice model in practice presents problems to a country already engulfed with political and economic problems that has brought the country onto its knees. This study explores the views or perspectives of youth practitioners regarding the effectiveness of youth justice in Zimbabwe. In order to place this research within the Zimbabwean context the participants are Zimbabwean living in New Zealand who have worked in Zimbabwe or New Zealand with young people in conflict with the law. The literature review put this study in a broader context by presenting a historical overview of youth legal system in Zimbabwe. The University of Zimbabwe is encouraging the researchers to focus on the topic. Zimbabwean youth legal systems, models, politics, international laws and practice is discussed and analysed in this study. The New Zealand historical legal context is also used to give the Zimbabweans the context in which the models that were suggested to be adapted by Zimbabwe were operating on. To have a full picture of the problems in the youth justice in Zimbabwe, there was a need for the participants to define the word justice and law as to be able to evaluate whether there is justice in the Zimbabwean youth laws. However the findings indicated that different participants defined the word justice differently. To some, law and justice is one and the same thing but some see justice as independent from law as not all laws are just but because they are the laws have to be followed regardless of their unfairness or immorality. This ambiguity in definition of justice and law is also reflected in the related literature for the study. The study showed that the context in Zimbabwe changed in terms of social structures, economic status and political climate. But the youth legal system remained the same, therefore resulted in application of non contextual youth justice models that are one shoe fits all and therefore Zimbabwean youth laws and court processes are analysed and discussed from historical to modern perspective with the focus of finding working solutions. The Zimbabwean legal system cannot be discussed without looking at the history of its formation. Zimbabwean law has a parallel system, a constitutional law and customary law. The foundation of the Zimbabwean constitutional law is based on the Roman Dutch law which was brought to Zimbabwe from Cape of Good Hope during the time when Zimbabwe was colonised by Britain. This explains why people of Zimbabwe feel distanced from their own legal system. Constitutional Law is viewed as the law of the state enforced by the state to serve the interest of those in power rather than majority in Zimbabwe. Therefore reforms are suggested in this study so that the law will meet the needs of the public of Zimbabwe Constitutional. Laws can be changed over time to remain relevant to the changing context but not much has been changed in the Zimbabwean Constitutional Law from 1980 when the country gained its independence. The Zimbabwean Youth Development Policy on paper reflects the positive move in meeting the needs of the young people. International laws like CRC, ACRWC, UDHR and Beijing Rules were adopted and rectified. But despite all these positive developments a gap still exist between practice and theory in Zimbabwean legal processes, resulting in a poor youth justice management system. This study will not provide the solutions to the problems but it will make suggestions for reform that the researcher hopes might provoke the interest for other researchers to embark on the subject. It is also hoped that the policy makers and the politicians might consider the recommendations in this research and other research papers to follow to make amendments in policies and laws that will benefit the young offenders in Zimbabwe. The research will also add to youth justice resources that are lacking in Zimbabwean libraries and on line. This explains why some of the literature used might be older, the researcher used what is available.