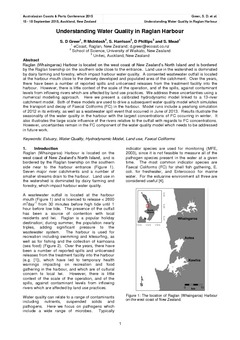 Raglan (Whaingaroa) Harbour is located on the west coast of New Zealand’s North Island and is bordered by the Raglan township on the southern side close to the entrance. Land use in the watershed is dominated by dairy farming and forestry, which impact harbour water quality. A consented wastewater outfall is located at the harbour mouth close to the densely developed and populated area of the catchment. Over the years, there have been a number of reported spills and unlicensed releases from the treatment facility into the harbour. However, there is little context of the scale of the operation, and of the spills, against contaminant levels from inflowing rivers which are affected by land use practices. We address these uncertainties using a numerical modelling approach. Here we present a calibrated hydrodynamic model linked to a 13-river catchment model. Both of these models are used to drive a subsequent water quality model which simulates the transport and decay of Faecal Coliforms (FC) in the harbour. Model runs include a yearlong simulation of 2012 in its entirety, as well as a wastewater spill event that occurred in June of 2013. Results illustrate the seasonality of the water quality in the harbour with the largest concentrations of FC occurring in winter. It also illustrates the large scale influence of the rivers relative to the outfall with regards to FC concentrations. However, uncertainties remain in the FC component of the water quality model which needs to be addressed in future work