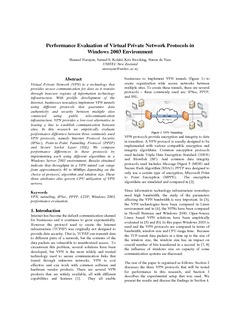 Virtual Private Network (VPN) is a technology that provides secure communication for data as it transits through insecure regions of information technology infrastructure. With prolific development of the Internet, businesses nowadays implement VPN tunnels using different protocols that guarantee data authenticity and security between multiple sites connected using public telecommunication infrastructure. VPN provides a low-cost alternative to leasing a line to establish communication between sites. In this research we empirically evaluate performance difference between three commonly used VPN protocols, namely Internet Protocol Security (IPSec), Point-to-Point Tunneling Protocol (PPTP) and Secure Socket Layer (SSL). We compare performance differences in these protocols by implementing each using different algorithms in a Windows Server 2003 environment. Results obtained indicate that throughput in a VPN tunnel can range from approximately 40 to 90Mbps depending on the choice of protocol, algorithm and window size. These three attributes also govern CPU utilization of VPN servers.