'Same, same, but different' : a comparison of rationales between historic and contemporary school garden development 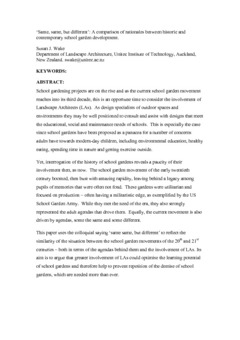 Wake, S.J. (2015, June). 'Same, same, but different': A comparison of rationales between historic and contemporary school garden development. In M. Ignatieva (Ed.), Proceedings of the 52nd World Congress of the International Federation of Landscape Architects: History of the Future (pp.666-671).

School gardening projects are on the rise and as the current school garden movement reaches into its third decade, this is an opportune time to consider the involvement of Landscape Architects (LAs). As design specialists of outdoor spaces and environments they may be well positioned to consult and assist with designs that meet the educational, social and maintenance needs of schools. This is especially the case since school gardens have been proposed as a panacea for a number of concerns adults have towards modern-day children, including environmental education, healthy eating, spending time in nature and getting exercise outside. Yet, interrogation of the history of school gardens reveals a paucity of their involvement then, as now. The school garden movement of the early twentieth century boomed, then bust with amazing rapidity, leaving behind a legacy among pupils of memories that were often not fond. These gardens were utilitarian and focused on production – often having a militaristic edge, as exemplified by the US School Garden Army. While they met the need of the era, they also strongly represented the adult agendas that drove them. Equally, the current movement is also driven by agendas, some the same and some different. This paper uses the colloquial saying ‘same same, but different’ to reflect the similarity of the situation between the school garden movements of the 20th and 21st centuries – both in terms of the agendas behind them and the involvement of LAs. Its aim is to argue that greater involvement of LAs could optimise the learning potential of school gardens and therefore help to prevent repetition of the demise of school gardens, which are needed more than ever.