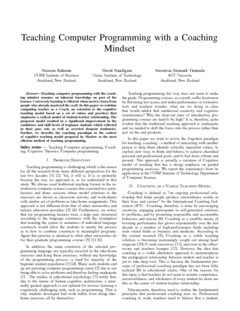 Teaching computer programming with the coaching mindset assumes an inherent knowledge on part of the learner. Conversely learning is efficient when novices learn from people who already mastered the craft. In this paper we redefine computing teacher as a Coach, an extension to the cognitive teaching model based on a set of values and practices that emphasize a radical model of student-teacher relationship. The proposed model resulted in a significant improvement in the confidence and skill levels of beginner students which reflected in their pass rate as well as arrested dropout tendencies. Further, we describe the coaching paradigm in the context of cognitive teaching model proposed by Maslow as the most efficient method of teaching programming.