Effect of quantization on competitive co-evolution algorithm - QCCEA versus CCEA 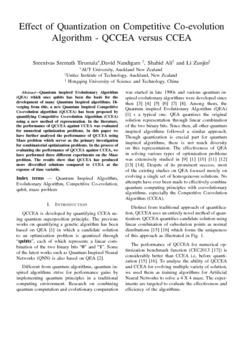 Quantum inspired Evolutionary Algorithm (QEA) which uses qubits has been the basis for the development of many Quantum Inspired algorithms. Di- verging from this, a new Quantum Inspired Competitive Co-evolution algorithm (QCCEA) has been proposed by quantifying Competitive Co-evolution Algorithm (CCEA) using a new method of representation. In the literature, the performance of QCCEA against CCEA was evaluated for numerical optimization problems. In this paper we have further analysed the performance of QCCEA using Maze problem which server as the primary investigation for combinatorial optimization problems. In the process of evaluating the performance of QCCEA against CCEA, we have performed three different experiments on the Maze problem. The results show that QCCEA has produced more diversified solutions compared to CCEA at the expense of time variable.