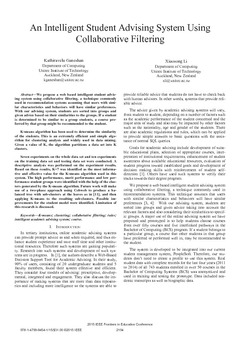 We propose a web based intelligent student advising system using collaborative filtering, a technique commonly used in recommendation systems assuming that users with similar characteristics and behaviors will have similar preferences. With our advising system, students are sorted into groups and given advice based on their similarities to the groups. If a student is determined to be similar to a group students, a course preferred by that group might be recommended to the student. K-means algorithm has been used to determine the similarity of the students. This is an extremely efficient and simple algorithm for clustering analysis and widely used in data mining. Given a value of K, the algorithm partitions a data set into K clusters. Seven experiments on the whole data set and ten experiments on the training data set and testing data set were conducted. A descriptive analysis was performed on the experiment results. Based on these results, K=7 was identified as the most informative and effective value for the K-means algorithm used in this system. The high performance, merit performance and low performing student groups were identified with the help of the clusters generated by the K-means algorithm. Future work will make use of a two-phase approach using Cobweb to produce a balanced tree with sub-clusters at the leaves as in [11], and then applying K-means to the resulting sub-clusters. Possible improvements for the student model were identified. Limitation of this research is discussed.