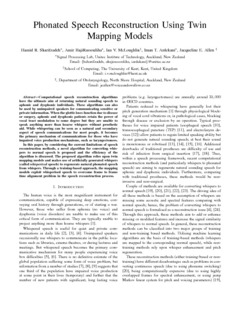 Computational speech reconstruction algorithms have the ultimate aim of returning natural sounding speech to aphonic and dysphonic individuals. These algorithms can also be used by unimpaired speakers for communicating sensitive or private information. When the glottis loses function due to disease or surgery, aphonic and dysphonic patients retain the power of vocal tract modulation to some degree but they are unable to speak anything more than hoarse whispers without prosthetic aid. While whispering can be seen as a natural and secondary aspect of speech communications for most people, it becomes the primary mechanism of communications for those who have impaired voice production mechanisms, such as laryngectomees. In this paper, by considering the current limitations of speech reconstruction methods, a novel algorithm for converting whispers to normal speech is proposed and the efficiency of the algorithm is discussed. The proposed algorithm relies upon twin mapping models and makes use of artificially generated whispers (called whisperised speech) to regenerate natural phonated speech from whispers. Through a training-based approach, the mapping models exploit whisperised speech to overcome frame to frame time alignment problem in the speech reconstruction process.