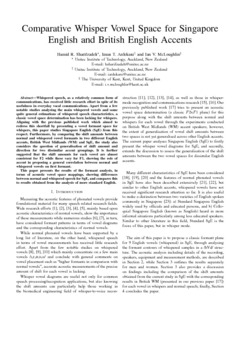 Whispered speech, as a relatively common form of communications, has received little research effort in spite of its usefulness in everyday vocal communications. Apart from a few notable studies analysing the main whispered vowels and some quite general estimations of whispered speech characteristics, a classic vowel space determination has been lacking for whispers. Aligning with the previous published work which aimed to redress this shortfall by presenting a vowel formant space for whispers, this paper studies Singapore English (SgE) from this respect. Furthermore, by comparing the shift amounts between normal and whispered vowel formants in two different English accents, British West Midlands (WM) and SgE, the study also considers the question of generalisation of shift amount and direction for two dissimilar accent groupings. It is further suggested that the shift amounts for each vowel are almost consistent for F2 while these vary for F1, showing the role of accent in proposing a general correlation between normal and whispered vowels on first formant. This paper presents the results of the formant analysis, in terms of acoustic vowel space mappings, showing differences between normal and whispered speech for SgE, and compares this to results obtained from the analysis of more standard English.