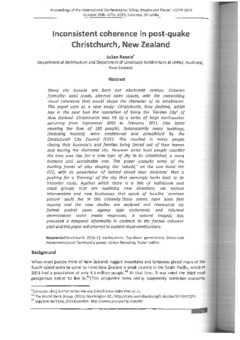 Many city layouts are born out nineteenth century Victorian formality : axial roads, planned open spaces, with the overarching visual coherence that would shape the character of its inhabitants. This paper uses as a case study: Christchurch, New Zealand, which has in the past had the reputation of being the ‘Garden City’ of New Zealand. Christchurch was hit by a series of large earthquakes occurring from September 2010 to February 2011, (the latter claiming the lives of 185 people). Subsequently many buildings, (including houses), were condemned and demolished by the Christchurch City Council (CCC}. This resulted in many people closing their businesses and families being forced out of their homes and leaving the shattered city. However some local people consider the time was ripe for a new type of city to be established, a more humane and sustainable one. This paper unpacks some of the duelling forces at play shaping the 'rebuild,' on the one hand the CCC, with its powerbase 'of behind closed door decisions' that is pushing for a ‘framing' of the city that seemingly harks back to its Victorian roots. Against which there is a tide of individuals and small groups that are exploring new directions, via various interventions and new businesses that speak of how the 'common person' could live in this Urbanity. These events have been fast moving and the case studies are explored and researched via formal central news agency type statements and informal decentralised social media responses. A natural tragedy has provoked a temporal informality in contrast to the formal coherent past and this paper will attempt to explore these ramifications.