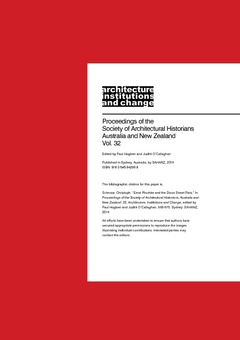 Ernst Plischke’s life and work have been thoroughly researched and written about. However, one crucial moment still remains uncertain – and it seems that, for New Zealand Architectural History, much hinges on this one uncertain episode: the project in question is the first high-rise housing block in Wellington of 1942, the Dixon Street Flats. New Zealand-based architectural historians have spent much time and effort to establish the facts, asking: was the project mainly designed by Ernst Plischke, or by the Head of the Department of Housing Construction, Gordon Wilson? Linda Tyler did not question Plischke’s version of the events. Later, Robin Skinner has argued one way, Julia Gatley the other way. It is Plischke’s position within the Department of Housing Construction that is the cause for this uncertainty. As the department’s head, Gordon Wilson was responsible for the buildings designed in the department. And as such, he received a New Zealand Institute of Architects Gold Medal for the Dixon Street Flats in 1947. The bigger issue behind this one event is whether modernist architecture in New Zealand did develop from ‘within’ or whether it was mostly introduced via the input from European emigrants, specifically Ernst Plischke. Through the study of private archival material and through the revisiting of published and unpublished material, this paper extends the current knowledge on the circumstances of the designs of the Dixon Street Flats and other projects by the Department of Housing construction, thus adding to the larger lines of development of modern architecture in New Zealand, and to aspects of Ernst Plischke’s involvement with the project of state modernisation in New Zealand.