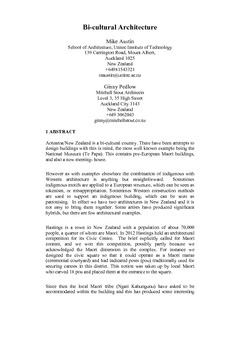 Aotearoa/New Zealand is a bi-cultural country. There have been attempts to design buildings with this is mind, the most well known example being the National Museum (Te Papa). This contains pre-European Maori buildings, and also a new meeting-house. However as with examples elsewhere the combination of indigenous with Western architecture is anything but straightforward. Sometimes indigenous motifs are applied to a European structure, which can be seen as tokenism, or misappropriation. Sometimes Western construction methods are used to support an indigenous building, which can be seen as patronising. In effect we have two architectures in New Zealand and it is not easy to bring them together. Some artists have produced significant hybrids, but there are few architectural examples. Hastings is a town in New Zealand with a population of about 70,000 people, a quarter of whom are Maori. In 2012 Hastings held an architectural competition for its Civic Centre. The brief explicitly called for Maori content, and we won this competition, possibly partly because we acknowledged the Maori dimension in the complex. For instance we designed the civic square so that it could operate as a Maori marae (ceremonial courtyard) and had indicated posts (pou) traditionally used for securing canoes in this district. This notion was taken up by local Maori who carved 18 pou and placed them at the entrance to the square. Since then the local Maori tribe (Ngati Kahungunu) have asked to be accommodated within the building and this has produced some interesting results. The European brief for such a building specifies areas and functions while the Maori brief talks in poetic terms of land and sky and the ascent up through the spaces of the building.