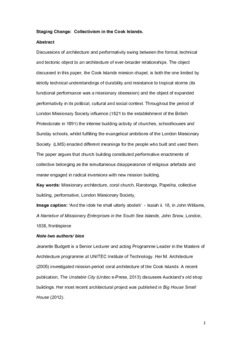 Discussions of architecture and performativity swing between the formal, technical and tectonic object to an architecture of ever-broader relationships. The object discussed in this paper, the Cook Islands mission chapel, is both the one limited by strictly technical understandings of durability and resistance to tropical storms (its functional performance was a missionary obsession) and the object of expanded performativity in its political, cultural and social context. Throughout the period of London Missionary Society influence (1821 to the establishment of the British Protectorate in 1891) the intense building activity of churches, schoolhouses and Sunday schools, whilst fulfilling the evangelical ambitions of the London Missionary Society (LMS) enacted different meanings for the people who built and used them. The paper argues that church building constituted performative enactments of collective belonging as the simultaneous disappearance of religious artefacts and marae engaged in radical inversions with new mission building.