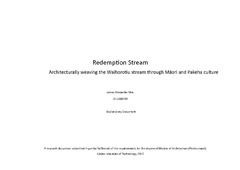 Ure, J.A. (2015). Redemption stream: Architecturally weaving the Waihorotiu stream through Māori and Pakeha culture. An unpublished research document submitted in partial fulfilment of the requirements for the degree of Master of Architecture (Professional). Unitec Instutute of Technology.

The meaningless pattern of buildings, monotony, and fast pace of the city has created a disconnection between people and the Auckland CBD environment. As a consequence people are largely unaware of the diverse and meaningful experiences of the city, weakening the significance of place for individuals, and cultures. This research project, Architecturally weaving the Waihorotiu stream through Maori and Pakeha culture, explores the possibility of strengthening the meaningful relationship between people and the environment through a synthesis of the urban and natural in central Auckland. The project analyses the social, urban and cultural values of the central Auckland context in conjunction with an evaluation of architectural elements that increase experiential time, and create an engagement of people with the significant buildings, and restored stream. The combining of these core elements suggests the possibility of a common cultural understanding of caretaking for the land through the participation in common experiences, where common meanings and symbols are created and understood. ... "Auckland’s main CBD road, Queen Street, provides a visible connection between the cities coast and ridgeline environments. Many Aucklanders may be unaware that the road follows the original path of the Waihorotiu stream. The Waihorotiu stream, which was the water source for early European Auckland, and once harboured waka and sailing ships, still runs beneath Queen Street in a maze of storm water pipes and leftover 19th century culverts"--Introduction on page 6. Project site: Queen Street, Auckland, N.Z.