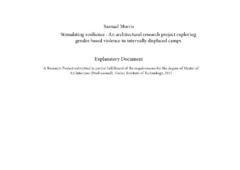 It is widely known and accepted that during an emergency, whether it is a natural disaster or a man-made conflict, women and girls are especially vulnerable to violence due to their gender specific roles, specific needs and society discrimination. Gender based violence (GBV) is a term applied to violence resulting in physical, sexual or mental harm performed by one gender to another. GBV and internally displaced people (IDP) are unfortunately linked together. Studies have shown that GBV is most prevalent in environments where there is a general lack of respect for human rights and urban environments which lack social structure. The United Nations and other humanitarian organizations are aware of GBV occurring in IDP camps, and have released handbooks on how to address the issue. Yet GBV is still common in IDP camps. The research is focused on the internal displacement of over 120,000 residents of Zamboanga City in the Philippines as a result of a 3 week siege led by the Moro National Liberation Front (MNLF) which occurred in September 2013. The research commences with an investigation of urban, spatial and social qualities within existing IDP camps in Zamboanga. The question is then posed, what role can architecture play in the prevention of, or to at least mitigate GBV from occurring? The question posed inadvertently directs the investigation towards the layout and urban fabric of IDP camps, community resilience and the building of community, both social and physical. The outcome of this research is the design of a community livelihood facility situated within an IDP camp. The following research will be achieved by visiting IDP camps in Zamboanga and completing field research. Tools such as the opportunity matrix will be utilized to study the patterns found within the camps. Spatial analysis of the camps and talking to experts in the field will help to define the extent of the problem and provide suitable solutions. Analytical drawing and modelling techniques will be used to test underlying spatial and conceptual strategies to see if they can be used to speculate and develop a narrative which discusses how females, both women and girls can reduce their own vulnerability. However, there will always be certain limitations to projects like this, especially when dealing with IDPs. This project aspires to enhance social elements, humanitarian rights, and mitigate GBV, but at the same time recognizes political influences and the allocation of resources often for political expediency rather for the well-being of the local community.