Parlour of the muses 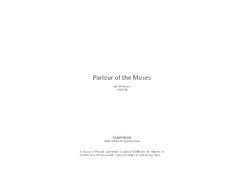 McKenna, K. (2015). Parlour of the muses. An unpublished research project submitted in partial fulfillment for Master of Architecture (Professional). Unitec Institute of Technology.

Architecture is inherently collaborative, however the most pervasive image of a great architect is that of an isolated genius. This image is gendered and contradicts the normal practice of collaboration in design. In the history of architecture, collaborative relationships have been ignored in favour of the individual monograph, and thus pluralities, like the female side of a family tree, cease to exist. [The museum has played a part in the reputation of the male sole author ; the heroic individual]* Many architects who did not fit this image, have, until recently, remained critically unrecognised for their work. This research looks at similar phenomena within the art world and engages with the arguments in order to see what comparisons could be drawn with architecture. In order to bring these arguments together, to make this project more than a survey of criticisms and to move away from the single voice in an argument, this research uses the idea of dialogue as a means for questioning the dominance of polemic individuals. This research project looks at the use of dialogue as a design tool, as a means of exploring influences and collaborations, and as a means of questioning the image of the great architect. Allowing for the interruption of other voices, it provides a method for exploring the areas between two sides of an argument and avoiding rigid positions. This project attempts to imagine how a design might begin to express the complexities, the give and take, the conversations, and the collaborators. In this research the literature has oﬀered a theoretical anchor for creative explorations. This was done in two ways: firstly, the texts which were most influential to this project were taken and used as the basis for an exploration through written dialogue secondly, a further attempt to understand these arguments was made through drawings, models, and paintings, which explore elements of these texts and dialogues, suggesting possible criteria for design. *Quote from page 76 of this thesis.