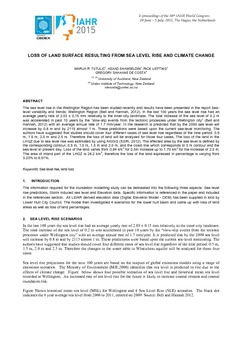 The sea level rise in the Wellington Region has been studied recently and results have been presented in the report Sea-level variability and trends: Wellington Region (Bell and Hannah, 2012). In the last 100 years the sea level rise had an average yearly rate of 2.03 ± 0.15 mm relatively to the inner-city landmass. The total increase of the sea level of 0.2 m was accelerated in past 10 years by the “slow-slip events from the tectonic processes under Wellington city” (Bell and Hannah, 2012) with an average annual rate of 1.7 mm/year. In the research is predicted that by the 2090 sea level will increase by 0.8 m and by 2115 almost 1 m. These predictions were based upon the current sea-level monitoring. The authors have suggested that studies should cover four different cases of sea level rise regardless of the time period: 0.5 m, 1.5 m, 2.0 m and 2.5 m. Therefore the loss of land will be analysed for those four cases. The loss of the land in the LHGZ due to sea level rise was estimated by using ArcGIS (ESRI, 2012). The affected area by the sea level is defined by the corresponding contour, 0.5 m, 1.0 m, 1.5 m and 2.0 m, and the coast line which corresponds to 0 m contour and the sea level at present day. Loss of the land varies from 0.84 km2 for 0.5m increase up to 1.70 km2 for the increase of 2.0 m. The area of inland part of the LHGZ is 26.2 km2, therefore the loss of the land expressed in percentage is varying from 3.23% to 6.51%.