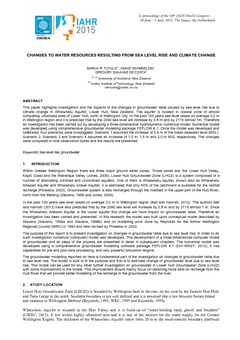 This paper highlights investigation and the impacts of the changes in groundwater table caused by sea level rise due to climate change in Whaiwhetu Aquifer, Lower Hutt, New Zealand. The aquifer is located in coastal zone of almost completely urbanized area of Lower Hutt, north of Wellington City. In the past 100 years sea level raised on average 0.2 m in Wellington region and it is predicted that by the 2090 sea level will increase by 0.8 m and by 2115 almost 1m. Therefore an investigation has been carried out by developing a three-dimensional hydrodynamic numerical model. Numerical model was developed using comprehensive groundwater modelling package FEFLOW 6.1. Once the model was developed and calibrated, four scenarios were investigated. Scenario 1 assumed the increase of 0.5 m of the mean seawater level (MSL). Scenario 2, Scenario 3 and Scenario 4 assumed an increase of 1.0 m, 1.5 m and 2.0 m MSL respectively. The changes were compared in nine observation bores and the results are presented