A life on Mars : an architectural research project into the creation of a permanent human presence on the surface of Mars 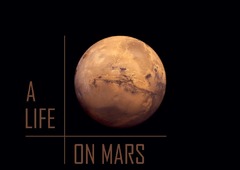 Solanki, R. (2015). A life on Mars an architectural research project into the creation of a permanent human presence on the surface of Mars. Explanatory Document. An unpublished research project submitted in partial fulfilment of the requirements of the degree of Master of Architecture (Professional). Unitec Institute of Technology.

From ancient times, our ancestors have peered in to dark abyss circling above them, wandering what lies on the tiny shimmering dots in the sky. The fourth rock from the sun has always beckoned. The planet in ancient times was covered in oceans of water, has almost completely lost this most vital of resources. Yet this planet offers the greatest possibility of sustaining human life outside our pale blue dot. This research project focuses on the premise that inevitably a Martian colony will be established. Maybe not today or tomorrow, but one day. With growing interest from the non-profit sector and thousands of volunteers that want to establish a life on Mars that one day may not be far off. If this scheme is ultimately successful, what would the architecture of Mars be? In the present, and in 50 years after the first crew arrive? Through analysing current proposals and literature studies this research project will attempt to push forth a hypothetical architectural solution to living and flourishing on the Red planet.