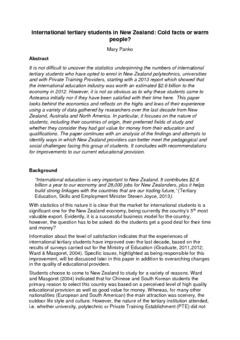 It is not difficult to uncover the statistics underpinning the numbers of international tertiary students who have opted to enrol in New Zealand polytechnics, universities and with Private Training Providers, starting with a 2013 report which showed that the international education industry was worth an estimated $2.6 billion to the economy in 2012. However, it is not so obvious as to why these students came to Aotearoa initially nor if they have been satisfied with their time here. This paper looks behind the economics and reflects on the highs and lows of their experience using a variety of data gathered by researchers over the last decade from New Zealand, Australia and North America. In particular, it focuses on the nature of students, including their countries of origin, their preferred fields of study and whether they consider they had got value for money from their education and qualifications. The paper continues with an analysis of the findings and attempts to identify ways in which New Zealand providers can better meet the pedagogical and social challenges facing this group of students. It concludes with recommendations for improvements to our current educational provision.