The causes of poverty 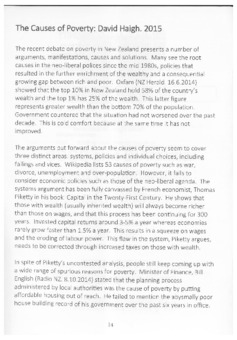 The recent debate on poverty in New Zealand presents a number of arguments, manifestations, causes and solutions. Many see the root causes in the neo-liberal polices since the mid 1980s, policies that resulted in the further enrichment of the wealthy and a consequentia l growing gap between rich and poor. Oxfam (NZ Herald. 16 .6.2014) showed that the top 10% in New Zealand hold 58% of the country's wealth and the top 1% has 25% of the wealth . This latter figure represents greater wealth than the bottom 70% of the population. Government countered that the situation had not worsened over the past decade. This is cold comfort because at the same time it has not improved.