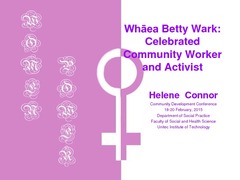 Betty Wark became involved in Māori activism during the late 1960s, with the emergence of the Māori Renaissance, a period of rebirth of indigenous power, language, culture and identity where issues such as Māori land rights and the revival of te reo Māori (Māori language) and tikanga Māori (Māori culture) were central to a resurgence of Māori identity. As Betty’s heart politics and activism evolved her identity as Māori was strengthened. • She was an active member of the Ponsonby branch of the Māori Women’s Welfare League which provided charitable services with the aim of enabling its members to play an effective part in the cultural, social and economic development of the community. It also sought to preserve, revive and maintain the teaching of Māori arts and crafts and the Māori language and culture.