The house crow (Corvus splendens): a threat to New Zealand? 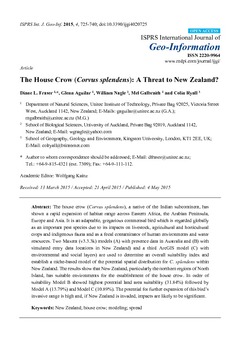 The house crow (Corvus splendens), a native of the Indian subcontinent, has shown a rapid expansion of habitat range across Eastern Africa, the Arabian Peninsula, Europe and Asia. It is an adaptable, gregarious commensal bird which is regarded globally as an important pest species due to its impacts on livestock, agricultural and horticultural crops and indigenous fauna and as a fecal contaminator of human environments and water resources. Two Maxent (v3.3.3k) models (A) with presence data in Australia and (B) with simulated entry data locations in New Zealand) and a third ArcGIS model (C) with environmental and social layers) are used to determine an overall suitability index and establish a niche-based model of the potential spatial distribution for C. splendens within New Zealand. The results show that New Zealand, particularly the northern regions of North Island, has suitable environments for the establishment of the house crow. In order of suitability Model B showed highest potential land area suitability (31.84%) followed by Model A (13.79%) and Model C (10.89%). The potential for further expansion of this bird’s invasive range is high and, if New Zealand is invaded, impacts are likely to be significant.

Except where otherwise noted, this item's license is described as CC0 1.0 Universal