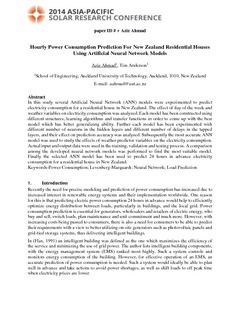 In this study several Artificial Neural Network (ANN) models were experimented to predict electricity consumption for a residential house in New Zealand. The effect of day of the week and weather variables on electricity consumption was analyzed. Each model has been constructed using different structures, learning algorithms and transfer functions in order to come up with the best model which has better generalizing ability. Further each model has been experimented with different number of neurons in the hidden layers and different number of delays in the tapped layers, and their effect on prediction accuracy was analyzed. Subsequently the most accurate ANN model was used to study the effects of weather predictor variables on the electricity consumption. Actual input and output data were used in the training, validation and testing process. A comparison among the developed neural network models was performed to find the most suitable model. Finally the selected ANN model has been used to predict 24 hours in advance electricity consumption for a residential house in New Zealand.