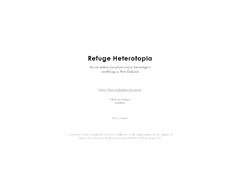 Forced displacement drives refugees to unstable situations and environments. Architecture embodies the expression of hospitality towards refugees, and the way that they are treated by the host society that welcomes them in determines the success of social integration. Many of the 51 million forcefully displaced people around the world are not welcomed with hospitality, and this loss of citizenship leads to the loss of livelihood, wellbeing, and can reinstate the very dangers they originally escaped from. Refuge Heterotopia is a research project exploring the possible ways of reinstating stability and citizenship for refugees as they begin their journey of resettlement at the New Lynn refugee reception centre where they go through a six week orientation programme upon arrival in New Zealand, in order to support their long-term integration into society. The research adapts literature on architecture and migration, including Jacques Derrida’s ‘City of Refuge’ from On Cosmopolitanism, Paul Carter’s Mythforms and Michiel Dehaene and Lieven De Cauter’s Heterotopia and the City: Public Space in a Post-Civil Society, which were analysed alongside literature on refugee displacement. Drawings and models were used to interpret the texts to create an architecture of refuge within the reception centre. The result is an architectural expression of refugee hospitality; a place of spatial liberation, restoring one’s sense of safety, security and autonomy. Just as each migrant has a different story, no refugee experience is the same. The architecture does not impose any preconceived ideas of refuge. Instead, it is an ambiguous labyrinth of possible refuge spaces, where the refugees can make sense of their new environment and seek their own form of refuge. Proposed site for Māngere Refugee Resettlement Centre rebuild at McNaughton Way, New Lynn, Auckland.