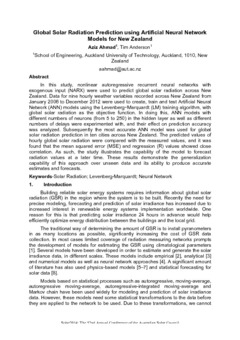 In this study, nonlinear autoregressive recurrent neural networks with exogenous input (NARX) were used to predict global solar radiation across New Zealand. Data for nine hourly weather variables recorded across New Zealand from January 2006 to December 2012 were used to create, train and test Artificial Neural Network (ANN) models using the Levenberg−Marquardt (LM) training algorithm, with global solar radiation as the objective function. In doing this, ANN models with different numbers of neurons (from 5 to 250) in the hidden layer as well as different numbers of delays were experimented with, and their effect on prediction accuracy was analyzed. Subsequently the most accurate ANN model was used for global solar radiation prediction in ten cities across New Zealand. The predicted values of hourly global solar radiation were compared with the measured values, and it was found that the mean squared error (MSE) and regression (R) values showed close correlation. As such, the study illustrates the capability of the model to forecast radiation values at a later time. These results demonstrate the generalization capability of this approach over unseen data and its ability to produce accurate estimates and forecasts.