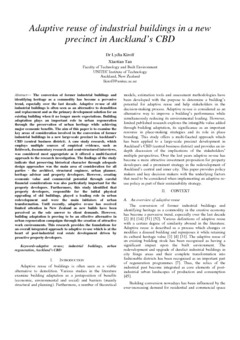 The conversion of former industrial buildings and identifying heritage as a commodity has become a pervasive trend, especially over the last decade. Adaptive re-use of old industrial buildings is often seen as an alternative to demolition and replacement and as the primary development solution for an existing building when it no longer meets expectations. Building adaptation plays an important role in urban regeneration through the preservation of urban heritage while achieving major economic benefits. The aim of this paper is to examine the key areas of consideration involved in the conversion of former industrial buildings in a new large-scale precinct in Auckland’s CBD (central business district). A case study research, which employs multiple sources of empirical evidence, such as fieldwork, documentary research and semi-structured interviews, was considered most appropriate as it offered a multi-faceted approach to the research investigation. The findings of the study indicate that preserving historical character through adequate design approaches was the main area of consideration for all parties - the architect, structural engineer, urban planner, heritage advisor and property developers. However, creating economic value and commercial potential through careful financial considerations was also particularly important for the property developers. Furthermore, this study identified that property developers, responsible for the initial physical upgrading of old buildings, played a leading role in urban redevelopment and were the main initiators of urban transformation. Until recently, adaptive re-use has received limited attention in New Zealand as new builds have been perceived as the sole answer to client demands. However, building adaptation is proving to be an effective alternative in urban regeneration campaigns through the creation of attractive work environments. This research provides the foundations for an overall integrated approach to adaptive re-use which is at the heart of post-industrial real estate development driven by proactive property developers.