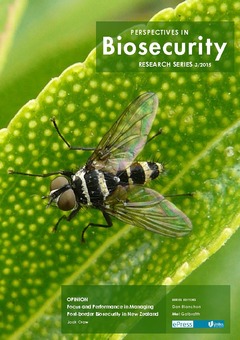 The New Zealand public, its industries and the conservation sector, are greatly concerned about the state of national biosecurity protection, awareness and system performance – and rightly so. Scarcely a day goes by without a new story in the media about a biosecurity breach, a pest, a threat or a related impact on the economy, biodiversity, human health or lifestyles. The vast majority of this public focus is on issues at the national border. Yet the greatest number and cost of biosecurity programmes in New Zealand, and the greatest impact on citizens’ wallets, are the many pest management programmes developed and implemented by regional and unitary councils. These programmes tend to be largely ignored by the national media, possibly because they are implemented by 17 disparate regional and unitary councils (hereafter referred to as councils), and possibly because most of the programmes are unspectacular, business-as-usual, necessary activities that help to keep farming profitable, the environment liveable and conservation achievable. There has also been, surprisingly, little wider scrutiny of the performance and scope of these regional bodies and their biosecurity programmes. The reasons for this lack of scrutiny and criticism of regional biosecurity programmes are largely due to their relative success, conservative regional policy, lack of clarity in annual reporting and lack of national oversight. The intention of this opinion piece is to highlight regional biosecurity programme scope and performance, credit their successes, explain in some way why scrutiny, reporting and performance have been poor, and suggest how better assessment and reporting would be good for councils, the Ministry for Primary Industries (MPI), the Department of Conservation (DOC) and biosecurity outcomes in New Zealand. It is not the intention to critique any specific council. Virtually all pest control and biosecurity programmes administered and funded by councils are defined in Regional Pest Management Strategies (RPMSs), which are created under the Biosecurity Act 1993.

OPINION: Focus and performance in managing post-border biosecurity in New Zealand, is licensed under a Creative Commons Attribution-NonCommercial 4.0 International License.