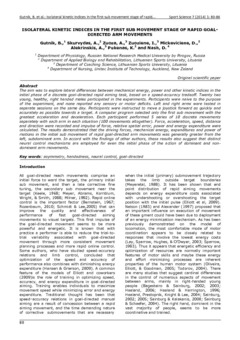 The aim was to explore lateral differences between mechanical energy, power and other kinetic indices in the initial phase of a discrete goal-directed rapid aiming task, based on a speed-accuracy tradeoff. Twenty two young, healthy, right handed males participated in the experiments. Participants were naive to the purpose of the experiment, and none reported any sensory or motor deficits. Left and right arms were tested in separate sessions on the same day. Participants were instructed to move a joystick forward as quickly and accurately as possible towards a target. A computer program selected only the first sub movement with the greatest acceleration and deceleration. Each participant performed 5 series of 10 discrete movements separately with each arm in each situation (100 movements altogether). Force, acceleration, speed, distance and direction were recorded and impulse of force, relative spatial error, power and energy expenditure were calculated. The results demonstrated that the driving forces, mechanical energy, expenditures and power of motions in the initial sub movement of rapid goal-directed arm movements was generally greater from the left, subdominant arm. In accord with the findings of other authors, these results also suggest that distinct neural control mechanisms are employed for even the initial phase of the action of dominant and nondominant arm movements