Oblique inclinations : re-establishing the function of the oblique 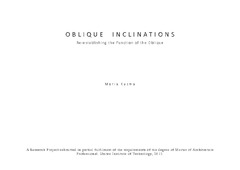 Kuzma, M. (2015). Oblique inclinations : re-establishing the function of the oblique. An unpublished research project submitted in partial fulfilment of the requirements of the degree of Master of Architecture (Professional), Unitec Institute of Technology, New Zealand.

This research thesis explores the way architectural performance can be increased through the pleasure of moments on the oblique in an urban realm dominated by orthogonality and verticality. The thesis analyses and explores the different applications of oblique planes and their surface conditions and the experiential conditions they produce. A paradigm shift occurred in the design and use of urban spaces initiated by the Industrial Revolution and made prevalent after World War 2. Urban spaces in contemporary cities have been taken over by the infrastructure and architecture built for the movement and storage of vehicles. As a result architecture and urban design is being designed to the scale for fast moving traffic rather than the scale for human movement and the potential richness of urban experience has diminished. Precedent analysis and observations realised a set of rules to ensure a hierarchy of movement and stopping zones. Architecture Principe’s exploration of the oblique was also analysed, from which a range of inclinations were selected and an adhesion table formulated in regards to surface conditions setting up a design methodology to articulate a hierarchy of movement. Additionally, the Three Part Inclination Method was used to derive the chosen range of inclinations and movement. An analysis of Auckland city, focusing on the infrastructure and architecture used for the movement and storage of vehicles showed a lack of designated public space which drove the site selection. The car park was chosen as it is a unique architectural typology that directly relates to the issue of dislocation from the ground plane. Choosing a car park for the research project ensures that the architecture is dominated by orthogonality and verticality and also ensured that the users of the oblique are affected by the issue of dislocation from the ground plane. The site includes three buildings starting with the Auckland City Downtown Car Park on the corner of Hobson and Quay Street, the Copthorne Hotel, and the ANZ building opposite the Copthorne Hotel. The rules from the precedent analysis, the adhesion table and the Three Part Inclination Method are applied to the overall site allowing the oblique to penetrate all three buildings and feed off the circulation, programs and surrounding context. The application of the oblique activates a journey promoting a range of movement, embodied experiences and moments within an architectural context ending with a public space that meets the water by Princess Wharf. Future projections for Auckland city’s growth as well as statistics on Auckland’s reliance on the motor vehicle prove that Auckland is and will remain affected by the issues caused by dislocation from the ground plane. The application of the oblique is the missing link to balance the dominance of orthogonality and verticality in the urban realm and is a step towards resolving the issues of dislocation from the ground plane created by reliance on the motor vehicle