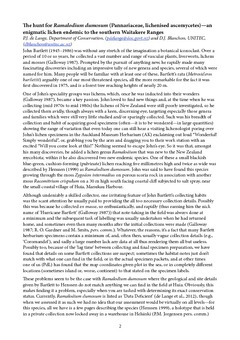 John Bartlett (1945–1986) was without any stretch of the imagination a botanical iconoclast. Over a period of 10 or so years, he collected a vast number and range of vascular plants, liverworts, lichens and mosses (Galloway 1987). Prompted by the pursuit of anything new, he rapidly made many fascinating discoveries including an impressive tally of new genera and species, several of which were named for him. Many people will be familiar with at least one of these, Bartlett’s rata (Metrosideros bartlettii) arguably one of our most threatened species, all the more remarkable for the fact it was first discovered in 1975, and is a forest tree reaching heights of nearly 20 m. One of John’s speciality groups was lichens, which, once he was inducted into their wonders (Galloway 1987), became a key passion. John loved to nd new things and, at the time when he was collecting (mid 1970s to mid 1980s) the lichens of New Zealand were still poorly investigated, so he collected them avidly, though always with a keen, discerning eye, targeting especially those genera and families which were still very little studied and/or sparingly collected. Such was his breadth of collection and habit of acquiring good specimens (o en—it is to be wondered—in large quantities) showing the range of variation that even today one can still hear a visiting lichenologist poring over John’s lichen specimens in the Auckland Museum Herbarium (AK) exclaiming out loud “Wonderful! Simply wonderful”, or, grabbing you by the arm and dragging you to their work station with an excited “Will you come look at this!” Nothing seemed to escape John’s eye. So it was that, amongst his many discoveries, he added a lichen genus Ramalodium that was new to the New Zealand mycobiota; within it he also discovered two new endemic species. One of these a small blackish blue-green, cushion-forming (pulvinate) lichen reaching ve millimetres high and twice as wide was described by Henssen (1999) as Ramalodium dumosum. John was said to have found this species growing through the moss Zygodon intermedius on porous scoria rock in association with another moss Racomitrium crispulum on a 30 m high south facing coastal cli subjected to salt spray, near the small coastal village of Huia, Manukau Harbour.