Algal communities in phytotelmata : a comparison of native Collospermum and exotic bromeliads (Monocotyledonae) in New Zealand 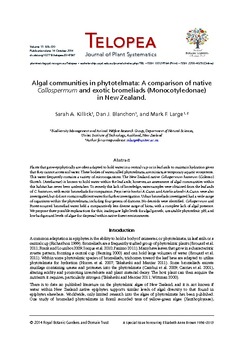 Plants that grow epiphytically are often adapted to hold water in a central cup or in leaf axils to maintain hydration given that they cannot access soil water. These bodies of water, called phytotelmata, are miniature temporary aquatic ecosystems. This water frequently contains a variety of microorganisms. The New Zealand native Collospermum hastatum (Colenso) Skottsb. (Asteliaceae) is known to hold water within the leaf axils; however, an assessment of algal communities within this habitat has never been undertaken. To remedy this lack of knowledge, water samples were obtained from the leaf axils of C. hastatum, with exotic bromeliads for comparison. Freycinetia banksii A.Cunn. and Astelia solandri A.Cunn. were also investigated, but did not contain sufficient water for further investigation. Urban bromeliads investigated had a wide range of organisms within the phytotelmata, including four genera of diatoms. No desmids were identified. Collospermum and Forest-sourced bromeliad water held a comparatively less diverse range of biota, with a complete lack of algal presence. We propose three possible explanations for this; inadequate light levels for algal growth; unsuitable phytotelmic pH; and low background levels of algae for dispersal within native forest environments.