A stroke of grief and resilience : a hermeneutic enquiry at 2-years post-stroke 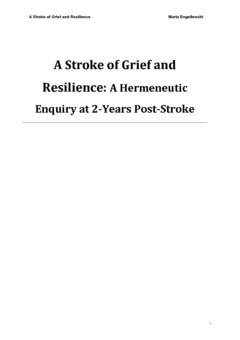 Engelbrecht, M. (2015). A stroke of grief and resilience : a hermeneutic enquiry at 2-years post-stroke. An unpublished thesis submitted in partial fulfilment for the requirements for the Unitec degree of Masters of Osteopathy, New Zealand.

Stroke is considered “the second leading cause of death worldwide” (Feigin et al., 2014a, p. 245), with an estimated 50, 000 stroke survivors in New Zealand (NZ) at present (Feigin, Krishnamurthi, Barber, & Arroll, 2014b, p. 61). The incident of a stroke can be considered “a traumatic life altering event” (Pierce, Thompson, Govoni, & Steiner, 2012, p. 258), with weighted consequences extending beyond the stroke survivor to influence their social network, including their family/whānau (Hunt & Smith, 2004). The stroke recovery process has been defined or described as three phases, namely acute, rehabilitation and life after stroke (or chronic phase) (Hafsteinsdóttir, Vergunst, Lindeman, & Schuurmans, 2011). During this process stroke survivors are discharged from hospitals to ‘at home care’. The majority of this care is provided by family, friends or whānau, who considered the stroke and return home as “a devastating experience” (Dyall, Feigin, Brown, & Roberts, 2008, p. 188). This expression was attributed to the altered family dynamics (Dyall et al., 2008). The current qualitative study focused on 2-years post-stroke, to explore the experiences of a stroke family along their journey. More specifically it seeks to answer the research question of "What are the lived experiences of family/whānau of a first-time stroke survivor, 2-years after the initial stroke?" The study aimed to investigate the phenomenon of life as a stroke family/whānau at 2-years post-stroke. This included examining the family/whānau's needs at 2-years and how healthcare professionals might improve the support and outcomes for stroke families. This was achieved through utilizing a hermeneutic phenomenological methodology with in-depth face-to-face interviews and thematic data analysis of interviews at 6-weeks, 1-year and 2-years post-stroke. The key themes that emerged were ‘the shocks of life and death’, ‘unconditional devotion’ and ‘continual change’. These demonstrated the immense devotion and resilience demonstrated by the family although they experienced numerous setbacks and shocks. The grief experienced by participants both in anticipation and following the stroke survivor’s death is also explored. The variety of experiences between participants also indicated the need for future research and interventions to better support stroke families.