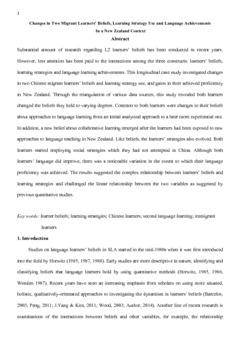 Substantial amount of research regarding L2 learners’ beliefs has been conducted in recent years. However, less attention has been paid to the interactions among the three constructs: learners’ beliefs, learning strategies and language learning achievements. This longitudinal case study investigated changes in two Chinese migrant learners’ beliefs and learning strategy use, and gains in their achieved proficiency in New Zealand. Through the triangulation of various data sources, this study revealed both learners changed the beliefs they held to varying degrees. Common to both learners were changes in their beliefs about approaches to language learning from an initial analytical approach to a later more experiential one. In addition, a new belief about collaborative learning emerged after the learners had been exposed to new approaches to language teaching in New Zealand. Like beliefs, the learners’ strategies also evolved. Both learners started employing social strategies which they had not attempted in China. Although both learners’ language did improve, there was a noticeable variation in the extent to which their language proficiency was achieved. The results suggested the complex relationship between learners’ beliefs and learning strategies and challenged the linear relationship between the two variables as suggested by previous quantitative studies.