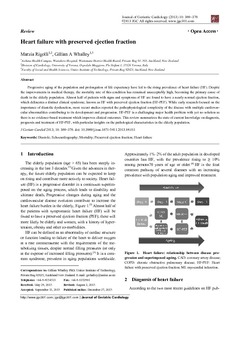 Progressive aging of the population and prolongation of life expectancy have led to the rising prevalence of heart failure (HF). Despite the improvements in medical therapy, the mortality rate of this condition has remained unacceptably high, becoming the primary cause of death in the elderly population. Almost half of patients with signs and symptoms of HF are found to have a nearly normal ejection fraction, which delineates a distinct clinical syndrome, known as HF with preserved ejection fraction (HF-PEF). While early research focused on the importance of diastolic dysfunction, more recent studies reported the pathophysiological complexity of the disease with multiple cardiovascular abnormalities contributing to its development and progression. HF-PEF is a challenging major health problem with yet no solution as there is no evidence-based treatment which improves clinical outcomes. This review summarizes the state of current knowledge on diagnosis, prognosis and treatment of HF-PEF, with particular insights on the pathological characteristics in the elderly population.

All the contents published by this Open-Access journal could be distributed under the terms of the Creative Commons Attribution Noncommercial Share Alike 3.0 Unported License, which allows readers to alter, transform, or build upon the article and then distribute the resulting work under the same or similar license to this one. The work must be attributed back to the original author and commercial use is not permitted without specific permission.