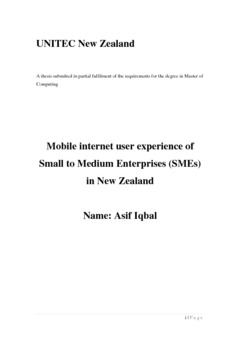 Iqbal, A. (2015). Mobile internet user experience of Small to Medium Enterprises (SMEs) in New Zealand. An unpublished thesis submitted in partial fulfilment of the requirements for the degree in Master of Computing, Unitec Institute of Technology.

This study is about SMEs (Small to medium enterprises) customers’ mobile internet experience in relation to its key attributes such as speed, security, cost, coverage, reliability and smart phones used. This study is essential as mobile internet’s speed has increased substantially over the past few years in New Zealand especially with the launch of 3G (3rd Generation Network) and 4G (also known as LTE- Long Term Evolution) by Vodafone New Zealand followed by Telecom and 2degrees Mobile lowering the prices on account of competition. Long Term Evolution (LTE) provided 10 times faster speed than on existing network infrastructure for Vodafone New Zealand. Faster speed of 3G and 4G networks has also driven change in the way many businesses operate. It has also made an impact on users’ experience and behaviour towards business gadgets and use of business applications on the go. TAM (Technology Acceptance Model) has been put in perspective while designing questionnaire for surveys on user/customer experiences of mobile internet. TAM provided proven foundation and framework to understand acceptance of a technology by end users and gain their perspective on it. Therefore, there are two surveys conducted, one on sales team (Business Channel) of service provider and second one on SMEs (Small to Medium Enterprises) decision makers. Interviews were also conducted on service provider’s SMT (Senior Management Team) to get an overall perspective of customer/user experience to identify and evaluate some gaps. Even though interviews are conducted on single service provider’s leadership team but the feedback sheds light and provides a perspective on user experience from cross functional team heads. In relation to survey on single service provider’s sales team (which includes different roles and divisions within) helps us to understand user experience from many roles’ view point within sales team. Further research can be conducted to include other service providers and functions within the business however single service provider is chosen in this case to limit the research within the scope of this study. The results of this study show in survey-2 on SMEs that when it comes to most important attribute of mobile internet for them, it is reliability aspect, coverage and cost come later in terms of their importance to SMEs, in fact SME’s are least concerned about ‘Cost’ in comparison with coverage and security of mobile internet. In relation to security aspect of mobile internet only 48.2 % of the SME respondents were concerned or very concerned about the security of information transmitted via mobile internet whereas there were further 27% SME respondents who were not sure about the security. It appears either they not concerned about security or they are yet to be educated on this issue. According to “Business Channel” perspective in survey-1 only 29% of SMEs are concerned about security. This shows that there is a gap between two perspectives which could possibly lead to poor user experience. There is scope for more research to be conducted in order to reach an alignment on both perspectives. It has also come out in results proving/selling MDM- mobile device management solution to SME’s is potentially a growing opportunity for some telecommunication companies in New Zealand as according to surey-2, 60% SME respondents are not using any MDM solution and 38% don’t know about it. According to survey-1 about 20% respondents advised that MDM is a requirement for their business customers which again shows a gap to be investigated in further studies.