More than a bridge builder 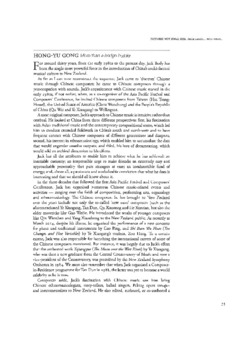 For around thirty years, from the early 1980s to the present day, Jack Body has been the single most powerful force in the introduction of China's multi-faceted musical culture to New Zealand. As far as I can now reconstruct the sequence, Jack came to 'discover' Chinese music through Chinese composers; he came to Chinese composers through a preoccupation with sounds. Jack's acquaintance with Chinese music started in the early 1980s, if not earlier, when, as a co-organiser of the Asia Pacific Festival and Composers' Conference, he invited Chinese composers from Taiwan (Hsu Tsang­ Houei), the United States of America (Chou Wenchung) and the People's Republic of China (Qu Wei and Ye Xiaogang) to Wellington. A most original composer, Jack'sapproach to Chinese music is intuitive rather than cerebral. He looked at China from three different perspectives: first, his fascination with Asian traditional music and the contemporary compositional scene, which led him to conduct extended fieldwork in China's south and north-west and to have frequent contact with Chinese composers of different generations and diaspora; second, his interest in ethnomusicology, which enabled him to accumulate the data that would engender creative outputs; and third, his love of documenting, which would add an archival dimension to his efforts.