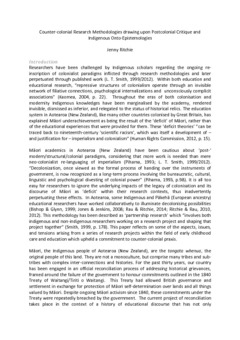 Researchers have been challenged by Indigenous scholars regarding the ongoing re-inscription of colonialist paradigms inflicted through research methodologies and later perpetuated through published work (L. T. Smith, 1999/2012). Within both education and educational research, “repressive structures of colonialism operate through an invisible network of filiative connections, psychological internalizations and unconsciously complicit associations” (Kaomea, 2004, p. 22). Throughout the eras of both colonisation and modernity Indigenous knowledges have been marginalised by the academy, rendered invisible, dismissed as inferior, and relegated to the status of historical relics. The education system in Aotearoa (New Zealand), like many other countries colonised by Great Britain, has explained Māori underachievement as being the result of the ‘deficit’ of Māori, rather than of the educational experiences that were provided for them. These ‘deficit theories’ “can be traced back to nineteenth-century ‘scientific racism’, which was itself a development of – and justification for – imperialism and colonialism” (Human Rights Commission, 2012, p. 15). Māori academics in Aotearoa (New Zealand) have been cautious about ‘post-’ modern/structural/colonial paradigms, considering that more work is needed than mere neo-colonialist re-languaging of imperialism (Pihama, 1993; L. T. Smith, 1999/2012). “Decolonization, once viewed as the formal process of handing over the instruments of government, is now recognized as a long-term process involving the bureaucratic, cultural, linguistic and psychological divesting of colonial power” (Pihama, 1993, p.98). It is all too easy for researchers to ignore the underlying impacts of the legacy of colonisation and its discourse of Māori as ‘deficit’ within their research contexts, thus inadvertently perpetuating these effects. In Aotearoa, some Indigenous and Pākehā (European ancestry) educational researchers have worked collaboratively to illuminate decolonising possibilities (Bishop & Glynn, 1999; Jones & Jenkins, 2008; Rau & Ritchie, 2014; Ritchie & Rau, 2010, 2012). This methodology has been described as ‘partnership research’ which “involves both indigenous and non-indigenous researchers working on a research project and shaping that project together” (Smith, 1999, p. 178). This paper reflects on some of the aspects, issues, and tensions arising from a series of research projects within the field of early childhood care and education which upheld a commitment to counter-colonial praxis.