Children's art, children's languages: A Mirror of the "hundred languages" of children, in and through their creative expressions. 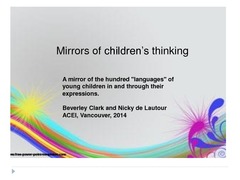 Clark, B.A., and De Lautour, N. (2014). Children's art, children's languages: A Mirror of the "hundred languages" of children, in and through their creative expressions. Paper presented at ACEI Global Summit on Childhood, Vancouver. April 10-13, 2014.,

This research has at its core a deep respect for children and artistic, non-verbal and linguistic expression. It seeks to explore the depth and complexity in the artwork particularly the visual arts that may reveal a sense of identity (as distinct from othernesss) and community (connection with others). It acknowledges that children's artistic expression stands on its own, it has its own place without explanation or interpretation but that additionally children's voices and non- verbal expression (such as body language) as well as linguistic expression; can offer insight into the meaning of both the experience and the outcome. Rather than the window into children's art which McArdle cautions against (2008), we regard this research as a mirror which reflects the child's thinking and knowing in relation to artistic expression, and reflects their sense of identity and their connection with others.