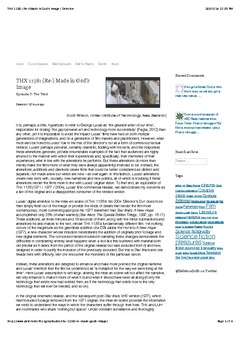 It is, perhaps, a little, hyperbolic to refer to George Lucas as ‘the greatest artist of our time’, responsible for closing ‘the gap between art and technology more successfully’ (Paglia, 2012) than any other; yet it is impossible to avoid the impact Lucas’ films have had on both multiple generations of imaginations, and on a generation of film-makers and practitioners. However, what must also be noted is Lucas’ role in the rise of the director’s cut as a form of continuous textual revision. Lucas’ perhaps perverse, certainly onanistic, fiddling with his texts, and the responses these alterations generate, provide innumerable examples of the fact that audiences are highly attuned to the manner with which their experiences and, specifically, their memories of their experiences, alter in line with the alterations he performs. But these alterations do more than merely make the films more of what they were always (apparently) intended to be. Instead, the alterations, additions and deletions create films that could be better considered as distinct and separate; not made anew but which are new – all over again. In this fashion, Lucas’ alterations create new texts with, crucially, new narratives and new politics, all of which is troubling if these alterations render the films more in line with Lucas’ original vision. To that end, an exploration of THX 1138 (1971 / 1977 / 2004), Lucas’ first commercial release, will demonstrate my concerns as a fan of the original and a disappointed consumer of the revised version