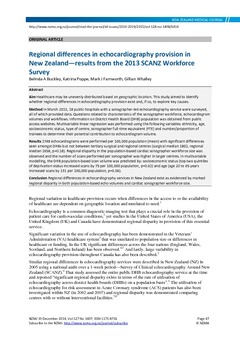 Summary A 2013 survey of NZ public hospital echocardiography services demonstrates unequal regional distribution relating to regional population size and demographics (age, ethnicity and socioeconomic status). Additionally there are regional differences in the distribution, population-based size and demographics of the cardiac sonographer workforce. This is the first study to describe the relationship of the cardiac workforce distribution to regional echo service provision. Abstract Aim Healthcare may be unevenly distributed based on geographic location. This study aimed to identify whether regional differences in echocardiography provision exist and, if so, to explore key causes. Method Method In March 2013, 18 public hospitals with a sonographer-led echocardiography service were surveyed, all of which provided data. Questions related to characteristics of the sonographer workforce, echocardiogram volumes and workflows. Information on District Health Board (DHB) population was obtained from public access websites. Multivariable linear regression was performed using the following variables: ethnicity, age, socioeconomic status, type of centre, sonographer full-time equivalent (FTE) and number/proportion of trainees to determine their potential contribution to echocardiogram volume. Results 1748 echocardiograms were performed per 100,000 population (mean) with significant differences seen amongst DHBs but not between tertiary surgical and regional centres (surgical median 1802, regional median 1658, p=0.18). Regional disparity in the population-based cardiac sonographer workforce size was observed and the number of scans performed per sonographer was higher in larger centres. In multivariable modelling, the DHB population-based scan volume was predicted by: socioeconomic status (top two quintiles of deprivation status increased scans by 75 per 100,000 population, p=0.02) and age (age 20 to 65 years increased scans by 131 per 100,000 population, p=0.06). Conclusion Regional differences in echocardiography services in New Zealand exist as evidenced by marked regional disparity in both population-based echo volumes and cardiac sonographer workforce size.