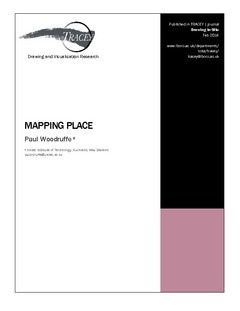 The use of a site-based drawing methodology as a tool to map place was undertaken in the belief that it is possible to think of maps not as representations of an established reality but as a tool to produce new realities, and that the act of drawing on site, with the pressures that come to bear during this action, assist the artist to engage in “fields of relations rather than arrangements of objects.” (Marot 2003:-iii), something considered vital to site analysis. This drawing approach considered many aspects of site analysis that Manuel de Sola-Morales wrote about in “A matter of things”, one of these was a desire for a methodology capable of revealing what de Sola-Morales describes as the “force of the peripheral place”, and exploring “the void between disconnected objects.” The work also demonstrated an ability to reveal “the void and the interstitial lands as positive material.”(de Sola-Morales 2008:-197), it achieved this through the use of irregular shapes to define objects and “white space” to present the tensions between these objects. It also defined varieties of peripheral space through categorizing characteristic conditions of the site, and challenged the use of purely digital analysis methodology described by de Sola-Morales as; “the sterile securities of analysis.” (de Sola-Morales 2008:-197). This site-based drawing when conducted alongside photography and GIS mapping, can address an established theory that “the science of space must be assessed at several levels,” (Lefebvre, Elden, Brenner 2009:-171) and that approaching spatial problems “cannot consist of one formal method, logical or logistical.” (Lefebvre, Elden, Brenner 2009:-171). With this methodology the suggestion of contradictory use of the site is more possible. This drawing on site is not only useful in ensuring a complete site analysis, but it also acknowledges that “everywhere, people are realizing that spatial relations also are social relations” (Lefebvre, Elden, Brenner 2009:-190). It does this through provoking the viewer into conversation around social uses and relationships within the sites by avoiding a direct meaning that could be agreed upon. Unlike drawings that adhere to the rules of perspective and scale, where logic can be deduced from the rendering, and a consensus reached on the nature of the site structure, these site drawings do not conform to the rules of pictorial realism or structural measurement, and so can achieve “a resultant cognitive shift enabling preconceptions about landscapes to be downplayed, and ways of analyzing landscapes to be enhanced.” (Griffith 2005). The choice of colours and the decision to use a painterly form of line-work in these drawings is made in the hope that a “turn toward artistic forms of representation can bring social research to broader audiences” (Leavy, 2005:-55), and that the drawings can somehow through the mystery and appeal of artistic colour work along with a strong sense of narrative can democratize discourse on space and place.