Culture in Motion : A mobile, inflatable auditorium brings arts programming to a tsunami-devastated region of Japan 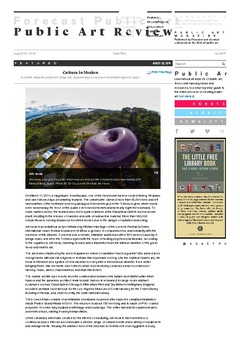 On March 11, 2011, a magnitude-9 earthquake, one of the most powerful in recorded history, hit Japan, and was followed by a devastating tsunami. The catastrophe claimed more than 18,000 lives and left vast swathes of the northeast severely damaged if not destroyed. In the Tohoku region, whole towns were swept away; the force of the quake even moved Honshu Island nearly eight feet eastward. To make matters worse, the tsunami also led to system failures at the Fukushima Daiichi nuclear power plant, resulting in the release of massive amounts of radioactive material. More than 160,000 residents were forcibly displaced from their homes due to the danger of radiation poisoning. Ark Nova is an ambitious project initiated by Michael Haefliger of the Lucerne Festival (a Swiss international music festival founded in 1938) as a gesture of compassion for, and solidarity with, the survivors of this disaster. Conceived as a mobile, inflatable auditorium with a 500-person capacity, it brings music and art to the Tohoku region with the hope of healing psychosocial traumas. According to the organizers, Ark Nova, meaning new ark, takes inspiration from the biblical narrative of the great flood and Noah’s ark. The ark is also inspired by the ancient Japanese notion of marebito—“sacred guests” who arrived from foreign lands with special religions or festivals that rejuvenate society. Like the mythical Noah’s ark, Ark Nova is intended as a symbol of renewal and recovery after a tremendous disaster. It is a visitor bringing those vital elements out of which culture is periodically composed and recomposed—namely, music, dance, improvisation, and ritual interaction. The mobile architecture results from the collaboration between the Indian-born British artist Anish Kapoor and the Japanese architect Arata Isozaki. Kapoor is renowned for large-scale abstract sculptures such as Cloud Gate in Chicago’s Millennium Park and Sky Mirror in Nottingham, England. Isozaki is perhaps most famous for the Los Angeles Museum of Contemporary Art, the Team Disney Building in Florida, and, most recently, the Qatar National Library. Their concert hall consists of an inflatable membrane modeled after Kapoor’s Leviathan installation inside Paris’s Grand Palais in 2011. The structure is about 120 feet long and is made of PVC-coated polyester. It comes fully equipped with stage and sound rigs. The entire hall and its equipment pack down into a truck, making it easily transportable.