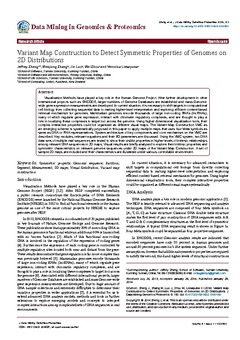 Visualization Methods have played a key role in the Human Genome Project. After further development in other international projects such as ENCODE, larger numbers of Genome Databases are established and mass Genome- wide gene expression measurements are developed. In current situation, it is necessary to shift targets in computational cell biology from collecting sequential data to making higher-level interpretation and exploring efficient content-based retrieval mechanism for genomes. Mammalian genomes encode thousands of large non-coding RNAs (lncRNAs), many of which regulate gene expression, interact with chromatin regulatory complexes, and are thought to play a role in localizing these complexes to target loci across the genome. Using higher dimensional visualization tools, their complex interactive properties could be organized as different visual maps. The Variant Map Construction VMC as an emerging scheme is systematically proposed in this paper to apply multiple maps that uses four Meta symbols as same as DNA or RNA representations. System architecture of key components and core mechanism on the VMC are described. Key modules, relevant equations and their I/O parameters are discussed. Using the VMC system, two DNA data sets of multiple real sequences are tested to show their visible properties in higher levels of intrinsic relationships among relevant DNA sequences in 2D maps. Visual results are briefly analyzed to explore their intrinsic properties and symmetric characteristics on relevant genome sequences under 2D maps of the Variant Map Construction. A set of sample 2D maps are included and their characteristics are illustrated under various controllable environment.