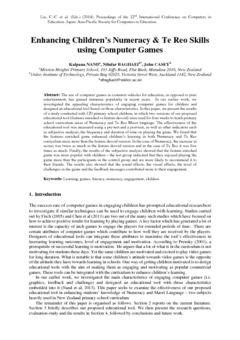 The use of computer games as common vehicles for education, as opposed to pure entertainment, has gained immense popularity in recent years. In our earlier work, we investigated the appealing characteristics of engaging computer games for children and designed an educational tool based on those characteristics. In this paper, we present the results of a study conducted with 120 primary school children, in which two versions of our proposed educational tool (features enriched vs feature devoid) were used for four weeks to teach primary school curriculum areas of Numeracy and Te Reo Maori language. The effectiveness of the educational tool was measured using a pre-test and a post-test, as well as other indicators such as subjective analysis, the frequency and duration of time on playing the game. We found that the features enriched game enhanced children’s learning in both Numeracy and Te Reo curriculum areas more than the feature devoid version. In the case of Numeracy, the increase in scores was twice as much as the feature devoid version and in the case of Te Reo it was five times as much. Finally, the results of the subjective analysis showed that the feature enriched game was more popular with children – the test group indicated that they enjoyed playing the game more than the participants in the control group and are more likely to recommend it to their friends. The results also showed that the sound effects, the visual effects, the level of challenges in the game and the feedback messages contributed more to their engagement.

International Conference on Computers in Education