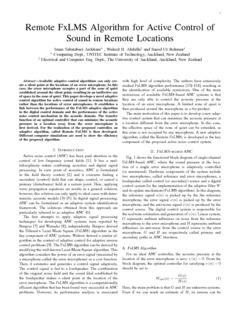 Available adaptive control algorithms can only create a silent point at the locations of an error microphone. In this case, the error microphone occupies a part of the zone of quiet established around the silent point, resulting in an ineffective use of space in the zone of quiet. This paper develops a novel adaptive control algorithm for active control of sound in remote locations rather than the locations of error microphones. It establishes a link between the performance of the FxLMS adaptive algorithm in the digital control domain and the performance of the active noise control mechanism in the acoustic domain. The transfer function of an optimal controller that can minimize the acoustic pressure in a location away from the error microphone is first derived. For the realization of the proposed controller, an adaptive algorithm, called Remote FxLMS is then developed. Different computer simulations are used to show the efficiency of the proposed algorithm.